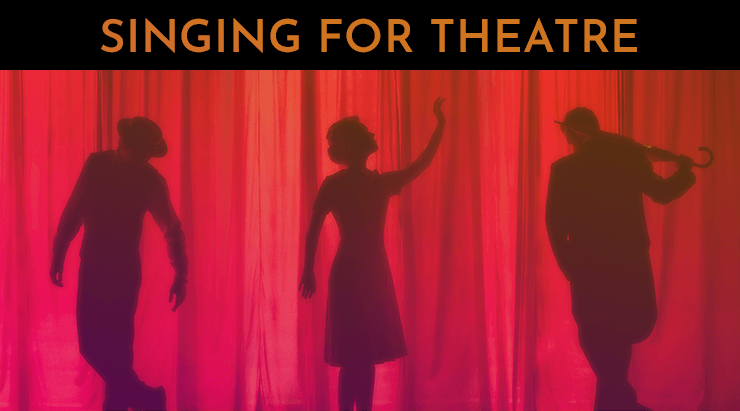 Musical theatre is a combination of traditional theatrical stage plays combined with singing and dancing. When you’re singing a musical theatre piece, you’re not simply singing, but acting out a part of the story at the same time. Songs in musicals aren’t just written to sound pretty: they always have a purpose, whether that’s to advance the story, reveal a character’s hidden emotions, or add to the audience’s understanding of a character. To develop a voice for musical theatre, you need to work on your singing technique but also your ability to research a story and character and convey them with authenticity.

If you’ve been cast in a musical, this aspect of understanding the larger story will hopefully be made clear during rehearsal. However, if you’re just singing a song that was originally in a musical, it will be important to research the show as a whole and understand 1) what character you’ll be performing as and 2) at what stage in the story this song appears. Is your character hopefully and cheery because it’s the beginning of an adventure, or dejected and exhausted because they’ve just been through a heartbreak? Even if your audience won’t know the story, understanding this will help you tap into the emotions of the piece.

Another thing to keep in mind when performing musical theatre songs is that the lyrics need to be clear and understood by the audience. Practice your annunciation and make sure your consonant sounds are sharp and loud. It may at times feel unnatural, like you’re over-pronouncing a word, but that’s what the audience needs in order to follow the story. A song in a musical is essentially a part of the dialogue, so you should treat it as such.

Performing a musical theatre piece can also be tricky because character is so essential. There are many songs in musicals where a singer is actually supposed to sound “bad” - nasally, croaky, breathy - to add to their characterization. Examples to listen to are the character Lucy from You’re A Good Man Charlie Brown or the character Fagin from Oliver! A famous example is the song “Sing!” from A Chorus Line, where the tone-deaf character Kristine is actually lamenting how she can’t sing while she struggles to sing on key in the song. If you’re performing a song out of the context of the show, it will be up to you to decide if you want to stay fully true to the character or make it your own. But in any case, remember that performing a character honestly and authentically means that you won’t necessarily be able to show off your chops exactly the way you want to, so leave your ego at the door.

4. Create Your Own Style

Along with this idea of what sound you want to create, you may have the belief that there is one particular musical theatre voice that all directors are looking for. You might be thinking of voices like Barbara Streisand, Patti Lupone or Idina Menzel - bright, penetrating belting with a controlled vibrato. While there is often a certain sound that fits the musical theatre style, there are also so many ways to fit your voice into the cannon. Think about Jennifer Hudson’s rich, booming performance in Dreamgirls or Kristen Chenoweth’s ringing, operatic performance in Wicked. Both of these styles would not be classified as the traditional musical sound but still worked effectively for their roles.

If you do want to aim for that traditional sound, though, work on activating your “mix” (the register between your head voice and chest voice) and bringing the sound to the front of your mouth to practice creating an almost-nasally brightness.

Finally, as stated above, the most important thing you can do to develop your musical theatre voice is research. Find your musical role models and listen to their recordings. Find various cast recordings of the song you’re singing and hear the different interpretations that all the perfor

mers have used. Read about the musical, its history and context, and get to know the story intimately. Get to know your character and the rest will follow.