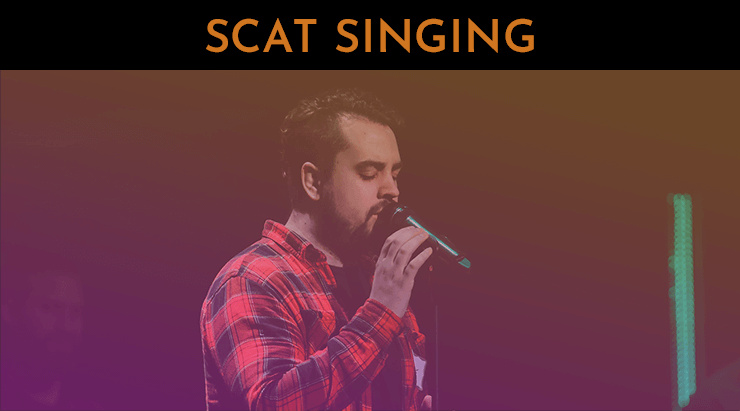 Scat singing is the act of using the voice to create instrumental sounds, often in a way that is experimental or improvisational. Scat became popularized in the early-to-mid 20th century with jazz singers like Louis Armstrong, Ella Fitzgerald, Sarah Vaughn and Cab Calloway. Even though it’s a skill that can be difficult to master, scat allows singers a lot of freedom once they get the hang of it, and is a thrill to hear when done well.

The greatest scat singers could “play” their vocal instrument alongside the great jazz instrumentalists of their time. A fantastic example is Ella Fitzgerald’s performance of the song “Honeysuckle Rose” with the Count Basie Orchestra. In this performance, she plays with the band as if she’s another instrumentalist on stage, riffing off of them and passing sounds back and forth to the different players. Give it a listen to hear a true artist at work. Scat should not only be viewed as an imitation of instruments, but as a masterful musical styling of its own.

As essential as scatting was to the jazz era, though, it is not simply a thing of the past. Contemporary artists like Lauryn Hill, Amy Winehouse and Jill Scott have made use of scat singing in their music, as well. Furthermore, a song doesn’t technically need to be jazz-influenced for a singer to be able to play along with the melody and create their own scat verses. If you’re deeply engaged with a song and want to add to it with a personal flourish, then scat is the tool for you.

The scat “words” and sounds are pretty iconic. Some are meant to directly imitate a particular instrument —“Bwah” would be imitating a horn, for example — while others are more ambiguous — like “Dah” and “Shoo Bop.” There are some scat sounds that are more popular than others, but since they’re just meant to be nonsense syllables, there are no incorrect sounds to sing on (although “Scooby Doo” should be avoided).

Being able to improvise in the jazz style takes a lot of prior knowledge, skill and practice. If you’re not studying music theory and jazz arrangements in a formal setting, picking up this skill may prove difficult — but not impossible. Many of the great jazz singers, like Fitzgerlad, made a name for themselves when they were entirely self-taught, and then received formal training later: who’s to say that you can’t do the same.

Turn on a favorite jazz song. Snap your fingers or tap your toes on the two and the four (so as you’re counting along, think “one, two, three, four”), and try to feel the “swing” of the song. On your first listen, sing along with the lyrics. Then, on a second go-round, listen more closely to what’s happening in the background with the instruments. How are they harmonizing? What kind of musical “conversations” are they having with each other? Can you try to sing along to what you’re hearing behind the lyrics, as well? This practice will help you get a deeper feel for a song. Scat comes with mastery, which means you have to really know a song inside and out to be able to create your own sounds from it.

Another option is to find a karaoke track of a jazz-style song. Amy Winehouse’s “You Know I’m No Good” is an approachable one, but choose a song you’re at least a little familiar with. Listen only to the instrumental backing (don’t look at the lyrics) and practice creating your own version of the melody or singing the melody on easy scat sounds like “Doo Bee” or “Bah Dah.” While you sing, try to feel out where you can add even just a few personalized sounds; an added trill or a glide into a note. It probably won’t sound perfect at first, but keep trying until you find a sound that works for you.

Scat singing may feel silly, and that’s actually an important part of it. Scat is all about a sense of play and having fun with a song. Many performers will laugh as they scat and lean into the silliness of it. As you practice scat singing, have fun with it — that way it will always be rewarding.